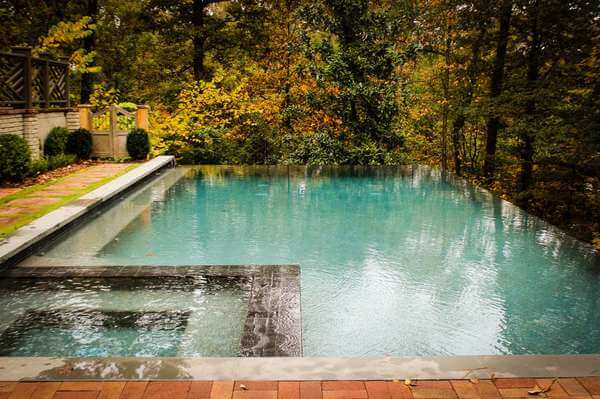 A pool in Vinings features a 90-degree infinity edge on two sides and appears to drop off into the woods. Contributed by: Habersham Pools

It’s a twist on bringing the indoors out: Pool styles and shapes are reflecting the more streamlined, contemporary interiors of some metro Atlanta homes. The result is that backyard water parks and organic-shaped pools are making way for more functional designs with crisp lines.

Contemporary design and geometric shapes represent the majority of the pools created by Shane LeBlanc, president and principal of Selective Designs, a custom pool builder based in Peachtree City. High-end resorts are influencing the design when clients ask for sleek pools compared to the look of a water park, he said.

Swimming pools are among the three most popular outdoor recreation amenities for 2016, closely trailing sports courts and spa features like hot tubs and saunas, according to the American Society of Landscape Architects’ 2016 Residential Landscape Architecture Trends Survey.

Given the swimming pool’s popularity, designers say it’s important to have an idea of how the pool will be used. If the homeowner wants to swim laps, the design will have to include a long stretch of water without benches or steps, Morgan said. If kids want to play games such as volleyball, he recommends a pool without a deep end, or one with a smaller deep end.

But overall, both designers say demand for kidney-shaped designs or pond-style pools surrounded by boulders are being drowned out by a desire for more defined edges and straight lanes for swimming laps.

The infinity edge, which makes it look as if the pool drops off, is no longer just for homes perched on the edge of an ocean or lake. A trough typically can catch the water and recirculate it back into the pool, bringing the style to backyards anywhere. For example, a black slate pool designed by Habersham Pools in Vinings with a 90-degree infinity edge appeared to drop off into the woods.

Some homeowners desire LeBlanc calls “water in transit,” which includes features like stepping stones and floating walkways. Those features can give the pool additional movement and character.

Depending on the budget, another option is to do a small infinity spa flowing into the pool. Some spa designs look like a cube of water flowing into a pool, said LeBlanc, whose firm in 2015 was a multiple winner at the 45th annual International Awards of Excellence from the Association of Pool & Spa Professionals.

For a winner in the “pools with a vanishing edge – 601 sq. ft. or more” category, Selective Designs adjusted the dimensions to create a tapered effect. The pool, which is 19 feet on one end and 14 feet on the other, looks longer and appears to stretch out to the nearby lake. The spa is tapered within 2 inches to help blend with the pool.

LeBlanc said the goal in his designs is to make the pool look natural, not over the top.

“People think they need big, big, big, but we don’t design that way,” he said. “If it’s designed well, they will get the biggest bang for their buck.”

Moving to Atlanta – Relocation Guide from the AJC